Just as Shakespeare, 1066, Britain’s Got Talent and photos of cats are requisite knowledge for existing in modern society, so should the 600 words on this page be.

Finally, chemistry looks a little bit like the movies!

Moving away from the heat, tonight I’m staying in the countryside at a mountain lodge operated by the National Taiwan University. We had a beautiful (unfortunately camera-free) sunset, followed by some fantastic food:

Earlier in the day however, we were slightly hotter. Niels and I were sampling in a river valley in the full sun, at 34 degrees and near 100% humidity. I’m now drinking my sixth litre of water for today. Sampling from 10.00 until 4.30, we have managed to get 40-odd samples which should give me plenty to do back in Cambridge, and if the results are ok a chapter of my thesis. Sounds scary talking about that sort of thing, but it’s a reality I am having to face up to quite quickly.

Today I went to Taroko Gorge, which was awesome. The weather was cooler and less humid than Taipei, although hiking was still tiring. We met up with a park ranger who has been conscientiously collecting samples for Niels for years, who took us to a fresh landslide which we spent several hours clambering over and sampling. Then I went for a walk up the gorge, and found this:

At the bottom are hot spring pools, the photo is taken from a rickety suspension bridge over the river.

Wow, what a day. I awoke at 5.45 am, showered and dressed in plenty of time and arrived at the bus stop nice and early. Things were interesting from the off though, as I had to lend a woman a fiver so she could get on the bus. I was repaid a few minutes later when the driver stopped at a cash point. Why he couldn’t have just waited until that point to collect the erstwhile £5 I don’t know. Arriving at Heathrow at 10.00 for a 12.35 flight, I checked in swiftly and waved farewell to my baggage. Loading up on the usuals, Private Eye and whichever newspaper is giving away a free bottle of water, I settled down in the departure lounge and read happily. At the right time, the 100 or so people due to fly to Hong Kong all trooped down to the gate as normal. From then on, things were far from normal. Firstly, rather than a walkway to the plane, we were squeezed into buses and driven all the way across the terminal, through a tunnel to a little backwater and then up the stairs to the plane. Where we sat and waited. And waited. Eventually the in flight entertainment was switched on, but still no word about whether we would be leaving. Assuming a reasonably short delay, I started watching Sherlock Holmes on the basis that it would be reasonably trashy and I could pause halfway through without losing the plot. Two hours later and I’d  finished that, and my magazines. At last, an announcement – the engineers were working on the plane, but had ordered the wrong part. More waiting, and eventually the part arrived. But it still didn’t fix the problem and the annoucement came over that we were to be “deplaned”, as soon as they could get some buses over to pick us up. An hour later we were on our way back to the terminal, each clutching a letter entitling us to £15 worth of food in the terminal restaurants. This was  at 4pm, and was to be the first thing I had eaten since breakfast at 7.

Wolfing down a positively mediocre lasagne, I heard a garbled announcement on the PA which might have related to us – I shoved my chocolate fudge cake (dry, with a texture best described as “plastique”) into my mouth and trotted over to the boards to find that there was a new gate available for our flight. Not knowing when we were to leave, I charged over and got onto the plane, now miraculously operational apparently. However, rapid take-off was stymied by the fact that there were 100 hungry, angry people milling around in the terminal, some of whom were still queueing to eat dinner, many of whom didn’t speak english, and all of whom unable to understand the terrible PA. We took off at 7.10, six and a half hours late.

I wrote that from Hong Kong airport, twelve boring, uncomfortable and sleep-deprived hours later, about to board my re-arranged connection to Taipei.

Which didn’t happen. After boarding, waiting for a bunch of people who got lost and finally being ready to leave, the doors broke and wouldn’t close. So we “deplaned” again, and have returned to the departure lounge to get a different plane to Taipei. It’s now 27 hours since I awoke, I dozed for about an hour on the plane and it will be a good four hours until I get to my hotel in Taipei, assuming of course that they haven’t given me up as a bad job and cancelled my booking.

2100 Taipei time, 31 hours after my bus departed from Cambridge:
And I’ve finally arrived in my hostel. The second flight to Taipei went without a hitch, and I’ve successfully cleared immigration. I caught a bus to the main city train station, thinking that the airport was out of the city but not too much, only to find that it was a 30km ride in the rain. Good job I didn’t go for the taxi approach, although I guess the fare would have been covered on expenses. Seeing the gridlock around the station I took the metro to the right stop, and am now the proud owner of their version of an oyster. The Taipei Easycard is cheap (40p for a single journey) and can be used to pay for shopping up to £25 and government services. There is one last nail in the coffin for this journey unfortunately, putting my luggage on and off four planes has caused one of the wheels on my holdall to snap, meaning it now kind-of drags behind me rather than rolling. Combining this with the plentiful puddles on the streets tonight and I’ve got some drying to do.

Much to Adam’s confusion, I have indeed spent today driving around collecting mud. It has been successful too, I now have a backpack full of little plastic bags of the stuff 🙂

Typhoon Morakot managed some quite impressive sediment deposition, these two are standing on top of a flood deposit that has already been somewhat flattened off by a bulldozer:

Venturing upstream, the damage was even more pronounced, with an entire riverbank buried when the river changed course.

Standing in what is now the river, there used to be fields over this entire area

However the most interesting part of the day was finding a stream that had been completely filled with logs washed down in the floods. Some of these were cedar, so there were lots of people with chainsaws hoping to strike it lucky and find some $1000 driftwood. I just took pictures:

A river of logs

It is the 29th birthday of the University today, so there were activities all morning including some obscure frisbee target-practice game. In teams of five, each member had three throws at a target made of magnetic numbers. Whoever knocked out the most points won something. I say something, because apparently we won and I might get a delivery on Monday. There seemed to be a lot of missing for what was quite a short throwing distance and so I was quite puzzled by how I seemed to be the only person able to hit the target more than once with my three throws. My 16 points took our team up to 29 points overall, at which point there were a few high-fives and we all sloped off for some lunch, which mostly consisted of “seafood my grandmothers would have avoided”

In the afternoon I went sightseeing Sparkie-style, which is mostly a diffusion process. It involved wandering around the local area for a while, then deciding to head into the city. The shiny new metro system has a touch-screen map to choose your destination, so I chose at random and got off when it reached my stop. Using the map and my GPS I discovered I was a short walk from the Central Park, so I went there. Here is the result:

Right then, let’s see how one uploads a picture to this thing 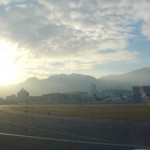 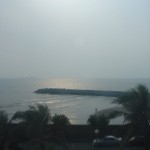 These are just a couple of snapshots, both through windows unfortunately… First we have the view upon arrival into Hong Kong airport (sadly not the old city airport which would have been fun!) Secondly we have the view from my office here in Kaohsiung. It beats the Cambridge view hands down 🙂

15 hours in the air, several more waiting around for buses and planes but I have made it to Taiwan. The weather is warm and humid, I didn’t need to bring all these jumpers. Turns out swimming shorts and sunglasses would have been a better idea. My hotel is on campus, just a short walk from the lab, and looks out onto the beach. It’s a hard life